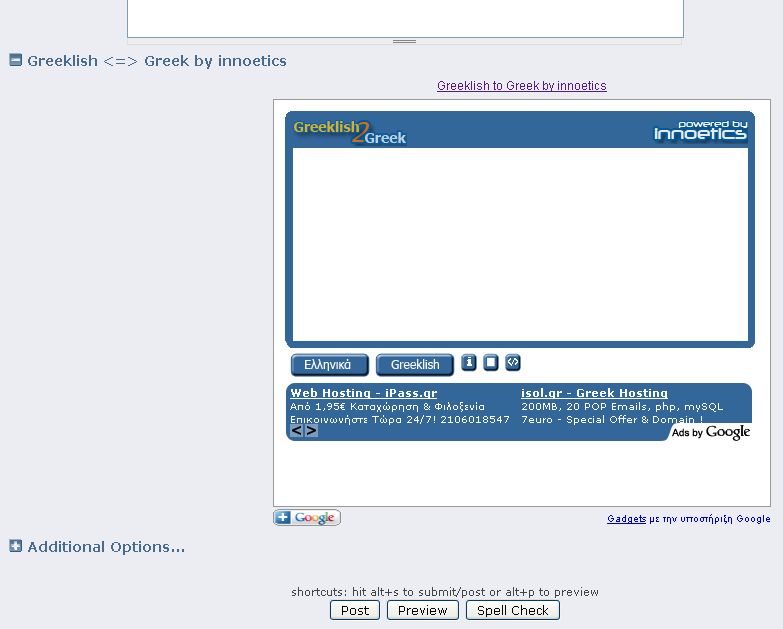 View full size
As this is a mod of interest for Greek language forums, a support page in Greek is opened in

Greek support board: Greeklish to Greek mod
Oct. 24, 2010: GreeklishToGreek_1_01.zip added for SMF 2.0 RC1 up, compatible with 2.0 final. Just small changes to be compatible with changes in templates. If there is another Greeklish to Greek version installed, it must be uninstalled before installing this one.
For SMF 1.0x, 1.1x and earlier SMF 2.0 up to Beta4 use GreeklishToGreek_1_0.zip instead.

Greeklish, Greek language written with latin characters, is a problem in Greek forums, however some people are not able to write properly in Greek or have no access to a computer where they that can write in Greek.

Several pages and programs existed, the best, including spell checking, was a demo of All Greek to me software but was limited to 255 characters. Lately a new page with 5000 chars limit was announced and a Google gadget that could be incorporated in webpages.

The gadget is positioned right below the text area, so that it will be easily found. It uses an expand - collapse javascript code as Additional Options..., that is below.

By clicking, the Greeklish to Greek window is expanded and Greeklish, copied or written there, can be converted to Greek, then copied to text area. The converter works also from Greek to Greeklish, rarely but sometimes needed. There is a limit of 5000 characters and spellchecking is incorporated in conversion.

A handy tool for Greek language SMF installations. Will save quite a few grins, recommendations and complaints. Also useful for administrators and moderators.

The mod was made as simple as possible, should work with all SMF 1.1x and 2.0x versions, UTF-8 or not. Height was chosen to be 400 pixels, as less caused scroll bars and 350 or less error codes in MSIE.

If the mod is installed manually you can have a customized gadget here and change the code.
You have to register or login to be able to leave a review
There are currently no reviews on this customization
Advertisement: