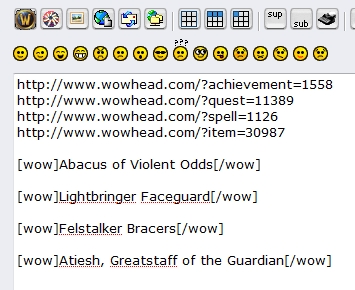 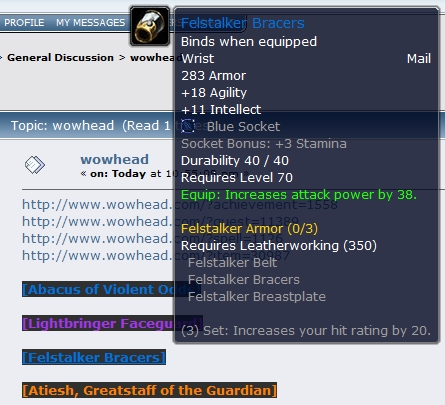 Features:
Users can enter any item url from www.Wowhead.com and will see a tooltip with the item's statistics hover over the post.

When clicked on, users will be taken to Wowhead's page for the item.

There are several ways tooltips can be entered using by links from wowhead.com

For instance the Lightbringer Faceguard can be entered in a post as...
http://www.wowhead.com/?item=30987

The text will display in the post with the text in items quality color and the tool tip.

Note: Quests, Spells, and Achievements are not currently supported using the wow bbc only direct links.

Your site must have libcurl or fopen in order for this mod to work.

To install the WoW - Tooltips mod on custom themes...

Copy the ./themes/default/images/bbc/wow.gif to the /images/bbc of your theme directory.

Note: Some custom themes deviate from the standard index.template.php and may look like...
Code Select Expand
// ]]></script>';


Known Issues:
For some users, if your forum is not in the root directory for your website this mod may not work correctly. Copying the wow folder found in yoursite.com/yourforum/wow to yoursite.com/wow will fix this in many cases.

Some hosts for security reasons will require you to set the file permissions (chmod) for the wow folder and the files within to 644 or rw-r-r.

Having Search Engine Friendly URLs turned on can cause the mod to fail.

Many web-hosts are using a utility known as ModSecurity to help protect the sites they host from hackers. Unfortunately ModSecurity is made overly secure and often can create false positives for many web programs including this one. You have have to contact your host and have them read http://blog.modsecurity.org/2007/02/handling-false.html. It will help them to create a personal rule for ModSecurity that recognizes the files in the wow folder as safe.

Credits:
Thanks to the team at Wowhead for writing the Powered by Wowhead Script.
Also thanks to Horris for writing the phpBB mod that this mod is based on, as well as the included wowhead scripts in the wow folder.

Version: 1.3 January 1, 2010
Added Item ID's to the wow bbc code to make it easier to link to the exact item you are looking for. Thanks to Axodious for providing the code.

Version: 1.2 November 09, 2009
* Updated to be compatible with SMF 2.0RC2 as some of the hooks that this code attaches to have been changed.

Version: 1.1 March 28, 2009
Wowhead support added
Interface made more simple by using Wowhead wrapper and linker Java Scripts
* Button Changed from a Thottbot specific button to a World of Warcraft button
*! All Thottbot options removed from 2.x due to conflicts with the thottbot power.js and 2.x
> Thottbot support may be re-added at a later date, when conflicts can be resolved

Version: 1.0 February 10, 2009
Adds the Powered by Thottbot java script to the index.template.php
Adds the [thott=][/thott] bbc code
Adds a button for easier usage of the bbc code

Change log:
Legend:
! bug fix
added feature
* changed
> comment
You have to register or login to be able to leave a review
There are currently no reviews on this customization
Advertisement: