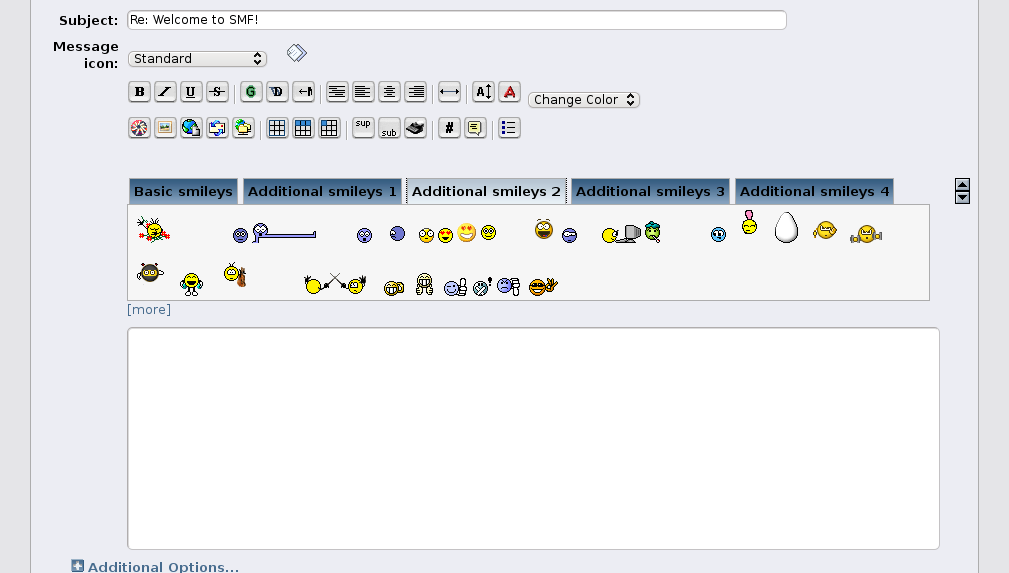 View full size
The mod distributed on this site may be outdated.
The latest version of this mod can always be found at the following address:
https://github.com/emanuele45/Tabbed-Smileys/releases


The mod adds a "tabbed interface" to the post form. The smileys are organized in "tabs": the first tab contains all the smileys configured to appear in the post form, the "additional tabs" are defined based on the number of rows of smileys present in the popup (one row = one tab). You can add new rows of smileys from the admin panel, in set smiley order.
With this mod it is possible to use all the available smileys without leave the posting browser window to reach the popup and keep low the number of smileys shown over the post form.

If you want to help, feel free!
The mod is now available at github:
https://github.com/emanuele45/Tabbed-Smileys
with a brand now BSD license attached to it!

NOTE: version 0.3.99b is a BETA version!
In this version I added the possibility to move (almost) all the elements of the posting interface into "tabs". It means that the formatting buttons, the attachments, the "other settings" are all moved on top of the post area each in a separated tab.
Once installed you will find a new drop down box in admin > Forum > Posts and Topics > Post Settings with 3 options:
Once selected the last option, a new checkbox will appear giving the possibility to chose to show the smileys' tabs in a separated row.
It should work, but I didn't test it that much, so feel free to use it, but be ready to face problems.

That said: I wait your feedback: is it useful? Is it useless? Feel free to test it and report problems or suggestions to improve it!
The changes affect only SMF 2.0, I won't bring them to SMF 1.1.x.


Important note for 1.1.x users
To install the mod on SMF 1.1.15 and newer versions, please use the Version Emulate mod.

Configuration
The number of tabs is defined by the number of rows of smileys in the popup: every row corresponds to a tab.

Doing like in the picture will create a third tab: the "basic" (with all the smileys in the post form), the first line of the popup (the

You have to register or login to be able to leave a review
There are currently no reviews on this customization
Advertisement: